It is based off the Mass-production model. It has high mobility that has a customized output system and armor. [1]

A rifle specifically designed to combat DRAGONs, operable in both destroyer and flight mode, the latter of which mounts it beneath the cockpit on a swivel mount which allows it to adjust its position for better accuracy. Standard ranged armament for all Arzenal Para-mail, it is fully automatic ballistic rifle and is also equipped with an underslung RPG launcher. In the event that the Glaive Hilda Custom needs both hands available, the Rifle can be mounted on its rear skirt in destroyer mode.

The Glaive Hilda Custom's primary melee weapon. Stored on the right wing when not in use, when drawn the blade opens out from a sword into an axe.

As with the other Para-mails of Arzenal, the Glaive Hilda Custom is equipped with a close range Freeze Bullet launcher in its left hand. Upon making contact with its target, the launcher fires a Freeze Bullet at point blank range directly into a DRAGON to freeze it solid. It can also be launched from a distance.

During a deployment against the DRAGONs, Hilda got ahead of herself in an attempt to take down the Unknown-Class DRAGON. She got trapped within its gravity barrier, until Ange arrived and damaged its horn. (CROSS ANGE: "Salia's Depression") 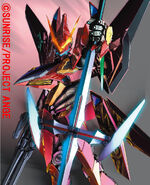 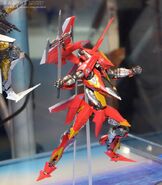 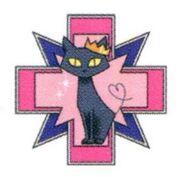 Retrieved from "https://crossange.fandom.com/wiki/AW-CBR115_(HL)_Glaive_Hilda_Custom?oldid=24689"
Community content is available under CC-BY-SA unless otherwise noted.