It's built for medium-range support fire.[1]

The para-mail is unique in respect, that it is equipped with twin guns.[1]

During a deployment against the DRAGONs, Rosalie got ahead of herself in an attempt to take down the Unknown-Class DRAGON. She got trapped within its gravity barrier, until Ange arrived and damaged its horn. (CROSS ANGE: "Salia's Depression") 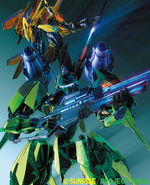 Vivian's Razor and Rosalie Glaive Rosalie in the Second Opening.

Community content is available under CC-BY-SA unless otherwise noted.