4.3 metric tons
The AW-CBX007 (AG) Villkiss (ヴィルキス, Virukisu?) is a Ragna-mail from Arzenal that appears in the CROSS ANGE Rondo of Angel and Dragon television series. It is piloted by Ange.

Originally thought to be an old Para-mail that has many problems with its power system and controls, the Villkiss is, in fact, a Ragna-mail, one of the "absolute weapons" created during the Ragnarok War. It has many hidden abilities, which can only be unlocked by three factors: the "inherited song", royal blood, and a royal ring.[1]

The Villkiss is capable of transforming into several different forms, each with its unique special abilities.

The high-speed mode. It is capable of extreme acceleration, and even has the ability to perform "dimensional jumps".This mode can be remotely controlled as means to be summoned by it's pilot.

The high-power mode. It draws phase space energy from its surrounding and converts it into power. In this form, the Villkiss can generate energy blades and optical barriers.

The form with all of its limiters released by the song Eternal Story, it is capable of firing the dimensional weapon "Discord Phaser".

A transformation only seen during the final battle against Embryo, it has the combined power of all previous forms.

By materializing an undamaged version of itself from the past, the future, or a parallel universe, the Villkiss is capable of self-repair, even regenerating entire limbs that have been lost.[2]

A rifle specifically designed to combat DRAGONs, operable in both destroyer and flight mode, the latter of which mounts it beneath the cockpit on a swivel mount which allows it to adjust its position for better accuracy. Standard ranged armament for all Arzenal Para-mail, it is fully automatic ballistic rifle and is also equipped with an underslung RPG launcher.  In the event that Villkiss needs both hands available, the Rifle can be mounted on either its rear skirt in destroyer mode or the underside of its right engine pod. The rifle was discarded during the DRAGONS' failed invasion of Misurugi when it ran out of ammo though after reuniting with the survivors from Arzenal, Villkiss received a replacement as a backup weapon.

The Villkiss's primary close-range weapon. Designed specifically to cut through the tough scales of DRAGONs, it is strong enough to pierce a Galleon-Class DRAGON. When Villkiss activates its Light-Barrier, the sword projects an extended energy blade around itself, boosting its range and cuting power and allowing it to easily slice a Navel Vessel in half.

As with the other Para-mails of Arzenal, the Villkiss is equipped with a close range Freeze Bullet launcher in its left hand. Upon making contact with its target, the launcher fires a Freeze Bullet at point blank range directly into a DRAGON to freeze it solid. It can also be launched from a distance.

During the DRAGON's failed invasion of the Empire of Misurugi, when the Villkiss' assault rifle ran out of ammo, Salamandinay handed over Enryugo's Seiran to Ange which became Villkiss's primary weapon for the duration of the series. The Seiran is standard equipment for the Ryuu-Shin-Ki and is able to fire a powerful energy beam. Unique to Enryugo's is a bayonet attached to it for close quarters combat. However, the Seiran has a far slower rate of fire than both the Anti-DRAGON Assault Rifle and the Beam Rifles used by the Diamond Rose Calvary while its sheer size hinders mobility. Like the Anti-DRAGON assault rifle, it can be mounted beneath the cockpit to be used in flight mode or mounted on its rear skirt when not needed in destroyer mode.

The Villkiss's ultimate weapons, built into each of its shoulders. They can only be activated in Uriel Mode which itself is triggered by Ange singing the "Endless Song".

Before the Ancient Humans stole the Villkiss, it was in possession of the Empire of Misurugi. Jill later revealed to Ange that the Villkiss was created as a Ragna-mail, a weapon of God. It was a mechanical angel of destruction and creation. (CROSS ANGE: "Her Right Arm's Past")

Following the deaths of Coco Reeve, Miranda Campbell, and Zola Axberg due to Ange's attempt at desertion in battle. Jill ordered Ange into battle again as Salia reported they detected more DRAGONs. Ange was given an old Para-mail, the Villkiss. According to Jill, it was perfect for someone who wanted to die. Ange managed to defeat a DRAGON and it became her main para-mail. (CROSS ANGE: "Villkiss Awakens")

During a deployment against the DRAGONs, the First Troop attempted to take down the Unknown-Class DRAGON. They all got trapped within its gravity barrier, until Ange arrived and damaged its horn. (CROSS ANGE: "Salia's Depression")

The Vilkiss after it transforms into Assault Mode for the first time. 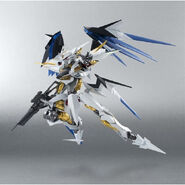 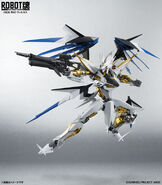 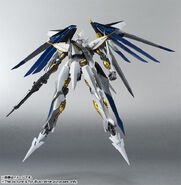 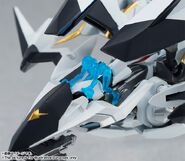 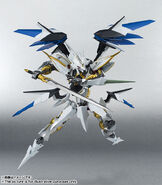 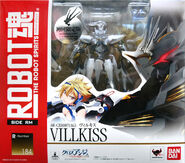 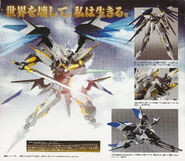 Villkiss in the Past Close-up (Extended Version).

Villkiss in Flight Mode damaged in the flashback.

Villkiss in Flight Mode in the Hanger.

Villkiss and the rest of the Para-mails in Flight Mode.

Villkiss and the Para-mails in Flight Mode fighting the Dragons.

Ange and Villkiss on a Magazine Promotional poster.

Retrieved from "https://crossange.fandom.com/wiki/AW-CBX007_(AG)_Villkiss?oldid=25636"
Community content is available under CC-BY-SA unless otherwise noted.