3.65 metric tons
The AW-GSX232 (VV) Razor (レイザー, Reizaa?) is a Para-mail from Arzenal that appears in the CROSS ANGE Rondo of Angel and Dragon television series. It is piloted by Vivian, a DRAGON [1].

It is a prototype with lighter armor than other para-mail's, and has enhanced mobility, that comes with poor output balance.[1]

A weapon unique to the Razor-type Para-mail. Can be used as either a melee weapon or thrown as a projectile. When not in use, it can be split in half and mounted on the hip wings.

During a deployment against the DRAGONs, she attempted to take down the Unknown-Class DRAGON. While trying to use her boomerang weapon, her para-mail lost its arm. After being trapped within the DRAGONs gravity barrier, Ange arrived and damaged its horn. (CROSS ANGE: "Salia's Depression")

The Razor in its Destroyer Mode.

The head of Razor in Destroyer Mode. 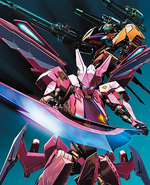 Vivian's Razor and Rosalie Glaive Rosalie in the Second Opening.

Vivian and her para-mail Razor in a war. 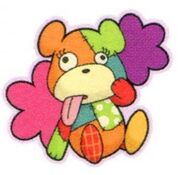 Retrieved from "https://crossange.fandom.com/wiki/AW-GSX232_(VV)_Razor?oldid=24510"
Community content is available under CC-BY-SA unless otherwise noted.