Cross Ange Rondo of Angel and Dragon Cast Reveal Ange
Ange was the fourth character to have her English voice revealed.

Hilda and Ange in Swimsuit.

Ange and Villkiss on a Magazine Promotional poster.

Ange and Salamandinay on a Promotional poster.

Ange and Hilda on a Magazine Promotional poster.

Ange, Hilda, Momoka, Vivian and Tusk on a Promotional poster.

Ange attacks Salia with the pen.

Ange in a Perolina outfit.

Ange, Hilda and Momoka arrives at the Para-mail's hanger.

Alektra telling a old story about the Light of Mana and the Empire of Misurugi with Ange.

Ange using her pistol in order to make her brother Julio to be backfired.

Ange in a angry way piloting her Ragna-mail Villkiss in Michael Mode.

Naomi and Ange in (Ange's Ending).

Ange and Vivian in her Dragon form in the Earth Ruins.Cross Ange ep 14 Ange and Tusk Witnessed.jpeg

Ange searching around in the city of Japan.

Ange and Tusk with Assault Rifles to protect themselves.

Ange and Tusk is about to enter the Capital City's Lair.

Ange is upset for what she has done was unforgivable.

Ange apologizes to Tusk about her insults.

Ange in Bedroom of the Hotel Room.

Ange and Tusk in the Bed.

Tusk and Ange kissing each others.

Ange, Tusk and Dragon Vivian are being escorted.

Ange and Tusk having a conversation with Salamandinay.

Ange in a Angry way is about to Torture Tusk.

Ange in the Dragon Clan Festival.

Ange and Tusk in the Dragon Clan Festival.

Ange wakes up in her Bed.

Ange as a Golf Player.

Ange pointing her Gun at the Diamond Rose Knights to defend herself.

Ange and Embryo in the Misurugi Dawn Pillar's Lair.

Ange is being manipulated by Embryo.

Ange hiding in the town of the Misurugi Empire Close-up.

Ange is shocked when she is surrounded by the People of Misurugi Empire being manipulated by Embryo Close-up.

Ange crying when she reads about Tusk's Diary and realized that he is in love with her. 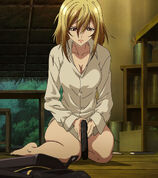 Ange kills one of the member of Misurugi Empire with her weapon (Extended Version). 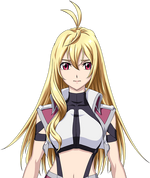 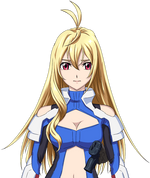