Aura (アウラ, Aura?) is a supporting character that appears in the CROSS ANGE Rondo of Angel and Dragon television series. She is the first human whom adapted her body and she also became a DRAGON after her home dimension became inhospitable for human life after the events of World War VII. At some point she was captured by Embryo and she is was held beneath the Empire of Misurugi, where they use her as the power source for the Light of Mana. After being freed from the Dawn Pillar the Light of Mana is permanately removed and the False Earth falls into disarray. Most of the inhabitants are either dead or forced to fight for survival.

Aura has a mysterious power, which she is powerful enough to single-handedly power all of the Light of Mana in the World of Mana. However, because the "humans" great use of Mana, Aura's power is quickly depleted. However, she can recharge her power by using the stabilized Dracunium Crystals harvested from the bodies of male DRAGON's. Auto was capable of temporarily stopping the dimensional merge though it caused great damage to her body but she quickly recovered after Embryo’s defeat. She also possesses wings, which, most likely, gave it the ability to fly.

After the war that devastated Earth and wiped out much of the human population, Embryo and his followers left behind the planet and migrated to a parallel universe. Those who remained were forced to adapt their own bodies in order to survive in the harsh environment of the ruined world, and the first one to do so was Aura, a brilliant scientist. 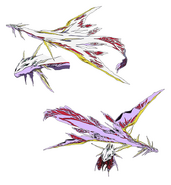 Aura being held beneath the Empire of Misurugi.

Retrieved from "https://crossange.fandom.com/wiki/Aura?oldid=25290"
Community content is available under CC-BY-SA unless otherwise noted.