The Aurora (アウローラ, Aurōra?) is a submersible featured in the CROSS ANGE Rondo of Angel and Dragon television series. [1]

The Aurora is a submersible that also acts as an aircraft carrier in the air and on the ocean. [1]

Mei and her family had been renovating the ship with powerful firearms such as Cryo Torpedos, a N-type Cryo Beam with a defense system that can put up a barrier. It can also store a large number of Para-mail. [1]

The Aurora has up to six torpedo tubes in its dorsal bow which fire Cryo Torpedoes, special ordinance that freeze their targets. During the invasion of Misurugi, the Cryo Torpedoes were used to create a wall of ice underwater to shield the ship from an enemy torpedo barrage.

An energy field used to protect the ship from attacks. Like the beam shields of the Ragna-mail, it is powerful enough to stop attacks though repeated and frequent attacks can overwhelm it.

The Aurora is able to shoot up to 34 missiles at once from a battery hidden beneath the rear landing strip. A single barrage was enough to sink several of Embryo's drone battle ships

The ship has up to six point defense CIWS turrets along is dorsal hull for shooting down missiles and enemy drones.

The Aurora's most powerful weapon, the Cryo Beam fires an energy wave that flash freezes everything in its path. At 100% it can bring down the Dawn Pillar with a single shot.

During the war with Embryo, the Ancient Humans used the Aurora as their flagship. It was theorized to be a "dimensional vessel" that came to the World of Mana together with Embryo, though the truth is lost to history. [1]

The Aurora was hidden in an underground hangar below Arzenal. After the Norma Administration Board (CROSS ANGE: "Her Right Arm's Past", "Arzenal in Flames") 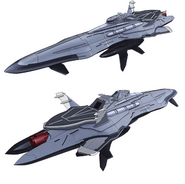 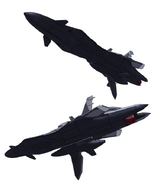 Control Room of the Aurora.

The Libertus's Crew Members of Aurora.

The Crew of Libertus (Extended Version).
Add a photo to this gallery

Retrieved from "https://crossange.fandom.com/wiki/Aurora?oldid=24844"
Community content is available under CC-BY-SA unless otherwise noted.