Chris (クリス, Kurisu?) is a supporting character that appears in the CROSS ANGE Rondo of Angel and Dragon television series. She is a Norma whom was a heavy artillery member of the First Troop and piloted the Para-mail AW-ZZR520 (CR) Hauser Chris Custom.

During Julio's attack on Arzenal, she initially joined "Libertus", along with Hilda and Rosalie. However, she later switched her allegiance to Embryo, after he used his abilities to revive her after she was killed during the attack. She was then given possession of the Ragna-mail EM-CBX004 Theodra.

She is a rather petite beauty taller than Vivian but just a few centimeters shorter than Rosalie, with Light Blue hair done that reaches down to her mid back and tied in a braided ponytail that rests on her right shoulder, with a bang covering her left eye, of which both are pink. Her figure is actually the third bustiest between Hilda and Rosalie and possibly on par with Ersha's.

Chris appears as a shy and fragile girl with a raspy voice, which is highly deceiving of her being majorly sharp-tongued (such as her insult towards Ersha's underwear). She's apparently perverted, as shown in her relationships with Hilda, Zola, and Rosalie

However she is also far more perceptive than Rosalie as she deduced Hilda's true feelings towards them with very little information at hand aside from her desertion. She is also rather vulnerable to being betrayed and took out her anger against Hilda for it spitting in Hilda's face for escaping from Arzenal leaving her behind, with no trace of her usual shy expression and behavior on her face nor body language and was very hurt when Ange caused the Death of Zola to the point of constantly attempting to bully her to make her pay. Yet she is also easy to forgive those who have wronged her being the first one to admit her mistake, wanting to reconcile and befriend Ange, and forgive Hilda for her betrayal and followed her into battle despite having doubt that they could survive defying humans.

She is a bit intimidated by Jill and her authority. When she was wounded during Julio's invasion of Arzenal, Chris joined Embryo because Embryo manipulated Chris's feelings into joining him stating that Hilda and Rosalie never cared for Chris in the beginning and they weren't her friends. With Embryo, Chris didn't care about her old friends including Ange.

Being a Norma she can "defy" the Light of Mana and is immune to its affects. She is also shown to be a competent pilot.

Due to Ange being directly responsible for Zola's death, she hates the fallen princess and tries to get revenge by bullying her constantly. She, together with Hilda and Rosalie engage in a form of ménage à trois in Zola's room, which is now owned by Hilda. Like the two, she also despises Ange, not only because she caused the death of Zola, but also because Ange is able to make more money than anyone else in the unit, where it is revealed that mail-riders are paid according to the number and type of DRAGON's they kill. (CROSS ANGE: "A Loner's Revolt")

After that, Ange saved the entire unit from being killed by a new, powerful DRAGON. She finally accepted Ange and befriends her, yet to Hilda's dislike as she still holds a strong grudge towards Ange over Zola's death. (CROSS ANGE: "Salia's Depression")

During the "Festa Festival" she was worried for Hilda. She won one million in cash for winning the Sports Festival winner. (CROSS ANGE: "Bikini Escape")

After Hilda's return in Arzenal, she and Rosalie visited him in prison Rosalie asked her why she deserted and why wouldn't she talk to them, by affirming they are friends but Chris realized that she never thought of them as friends , Hilda confirmed and says that she was just playing along with them. A furious Chris spat in Hilda's face and says that she should have died and that she bought Zola's room. (CROSS ANGE: "Goodbye from the Gallows")

She defended the base of the attack of Scuna-Class DRAGONs and heard a strange song. After that the mysterious Para-mail destroyed the half of island, Jill sent Salia's squadron to intercept the enemies. After Ange's fight, they returned to Arzenal. (CROSS ANGE: "Dragon Song")

Jill deputizes Hilda as interim squad leader while Salia is in detention for disobeying orders. She and Rosalie grumble in the first instance but accept when Hilda proposes them her place. When the report of a dragon survivor arrive, Hilda ordered to her and Rosalie to cover the residential area. After that the DRAGON fly around at outside Arzenal it meet Ange and it make a voice like Ange's song by hum, Chris looked on as Ange sang the Endless Song. Right after the song as ended the DRAGON change into Vivian, by following Ange and she discovered with the others that the DRAGON are humans. (CROSS ANGE: "Her Right Arm's Past")

It was than the "rescue message" reached the group, and they rendezvoused inside along with the other who witnessed the humans underneath dragon skin. It was around then that Jill proclaimed that the message to rescue them was untrue and Chris worded that the rescue was a lie. Jill than gave the Norma an ultimatum, as worded by Hilda: Die following the Commander's orders or be killed by the humans. Chris proclaimed that they could not defy the humans and survive by Hilda proclaimed that they wouldn't know until they tried. Chris chose to follow Hilda down to the Para-mails along with Rosalie and Ersha where they were soon joined by Tanya and her squad to aid in the fight against the humans. When the Tanya Squad takes off Chris notices metallic disk-like saucers that soon produce spikes and attack the lift off pad trapping the remaining Mail-Riders without their Para-mails seconds before the power went out. As the Maintenance Crew attempted the move the Villkiss down manually they were soon brought under fire by Julio's forces. Chris than lost all hope and was about to be shot when Hilda shielded her from an attack and retaliated against the attacker. When Chris questioned why Hilda responded that she doesn't let anyone die because that is what the first squad is about, leaving Chris speechless. The group continued to hold their position until an explosion above them sealed the elevator shaft stopping them from bringing down Para-mails. However soon after Ange came rushing into the battle, shooting the enemy taking the Villkiss and clearing away the path with her weapons, Chris watched as this occurred. They than prepared for take off with Chris finally acknowledging Hilda as captain, however as they were setting off a survivor from Ange's attack came to and shot Chris in the head, making her crash into a support column. Rosalie than contacted Chris and told her that she'd save her, with Chris, barely conscious thanking her but in the midst of saying her name her Para-mail exploded, sending her and what's left of her Para-mail failing to their doom. Embryo than appeared before Chris's body walking slowly towards her and shortly thereafter restored her to life at the same time that he did to a girl that Ersha was holding just before Julio's death. (CROSS ANGE: "Arzenal in Flames")

After the DRAGON's army the Singularity Point, she engaged immediately the fight against them to board of her new Ragna-Mail Theodra with her Knight leader Salia, Ersha, Tanya and Irma. She was shocked when she discovered Ange fought alongside the DRAGONs after that Salia received Embryo's orders, she ordered to she and Ersha to capture Ange by using the formation "Shining Rose Triangle" and captured Ange but she is saved by Tusk and Vivian and tried to escape despite she is restrained by Salia black Villkiss' wire. At the time they prepared to reform "Shining Rose Triangle", Ange started to scream at her Villkiss and saw the Villkiss turned in blue and disappeared with Tusk and Vivian. (CROSS ANGE: "The Black Angel of Destruction")

After Hilda was thrown in a prison cell for desertion, she and Rosalie being Hilda's lovers visit Hilda only to learn Hilda was playing along. She spat on Hilda, believing Hilda should have died and told Hilda that she'll take Zola's things. She gives Hilda and Ange the nickname "Breakout Sisters".

They remained eachothers' sole sexual partner following Zola's death and Hilda's ostracization. Becoming the new alpha female, she promised not to leave Rosalie as Zola and Hilda did. However, after her apparent death and rescue by Embryo, Chris resented both Hilda and Rosalie as she thought she was abandoned by them. But that changed when she and Rosalie got back together again after the Embryo battle.

Chris from the second ED. 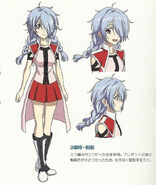 Salia, Ersha and Chris of the Diamond Rose Knights.

Retrieved from "https://crossange.fandom.com/wiki/Chris?oldid=25533"
Community content is available under CC-BY-SA unless otherwise noted.