Pilot (First Troop)
Coco Reeve (ココ・リーブ, Koko Rību?) was a supporting character that appeared in the CROSS ANGE Rondo of Angel and Dragon television series. She was a Norma whom was a new recruit at Arzenal, joining the First Squadron at the same time as Miranda and Angelise. She came to admire Angelise because of her former status as a princess, and, as a result, during her first deployment, she attempted to join her attempt to defect. However, she ended up getting killed by a DRAGON as a result. She was the pilot of the Para-mail AW-CBR115 Glaive.

She is a girl who dreams, loves pudding, and picture books. She thought that Angelise is a beautiful strong hero from a fairy tale.

Coco's skills and abilities weren't anything impressive, being dead last in her squadron.

She was a new cadet who idolized Ange. During the dispatch, she heard that Ange planned to return to the Empire of Misurugi, and decided to join her, saying, to take her with her. However, when the Singularity opened, she was killed by one of the DRAGON's that came from it. (CROSS ANGE: "Unyielding Spirit")

Following Coco's death, Miranda attempted to convince Angelise to stop her foolish attempt to defect, but she ended up getting killed by a DRAGON herself as a result. Miranda's death, along with Coco's send Angelise in a state of shock, causing her to accidentally crash into the Zola's AW-FZR304 (ZR) Arquebus Zola Custom, causing Zola to die as well.

Afterwards, Arzenal was unable to recover Coco's corpse, as well as Miranda's, through Zola's was successfully recovered. Despite not having her and Miranda's corpses, Arzenal decided to hold a small funeral for all all three of them. Arzenals Command held Angelise responsible for the deaths of the three, and therefore, as punishment, she forced to place their gravestones.

Per Arzenals tradition, upon her death, Coco was given back her original name, the name given to her by her parents, Coco Reeve, and had that name carved upon her gravestone.

The deaths of Coco, Miranda and Zola had a great emotional impact on Angelise. After she discovered that Coco was only twelve years old, the same age as her own former younger sister Sylvia in her, her death became especially tragic to her. As a result Angelise momentary gave up on living, and attempted crash into a DRAGON herself into to commit suicide. However, as she tried to do so the memories of Coco, Miranda and Zola's brutal deaths at the hands of the DRAGON's overwhelmed her, which, along with her mothers final words "live on", caused Angelise to find the will to live. Afterwards Angelise vowed that she would not die as easily as Coco and the others, and finally accepted her new identity "Ange".

Coco, Miranda and Zola their deaths would also caused a divide to happen among the surviving members of the First Squadron. While Salia and Vivian were quickly able to move on, and Ersha was willing to forgive Ange after the she took care of their funeral and killed the DRAGON that killed them, Hilda, Rosalie and Chris would continue to ill feelings toward her. Because of this the three would continually bully her and try to shoot her down during combat, causing Ange to continually ignore her order and try to kill as many DRAGON's herself as possible, which also caused her to earn more money, which only made the situation worse. However, after Ange saved the other member of the First Squdron an Unknown-Class DRAGON, Chris and Rosalie agreed to stop, which also caused Ange to agree to stop taking all the kills for herself. However, Hilda would continue to hold a grudge against Ange until they discovered that they actually had a lot in common. 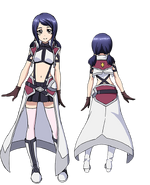 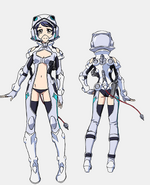 Retrieved from "https://crossange.fandom.com/wiki/Coco_Reeve?oldid=23706"
Community content is available under CC-BY-SA unless otherwise noted.