Dr. Gecko (ドクター・ゲッコー, Dokutaa Gekkoo?) is a supporting character that appears in the CROSS ANGE Rondo of Angel and Dragon television series. She is a genius physician, whom is an authority in the field of genetic engineering [1].

She is the doctor in charge among the DRAGONs. She sometimes acts a bit unrestrained and overdoes things but everybody recognizes her ability.

She hatches up a plan that utilize Tusk as a sample of the sex education because there are few men of the human type.

When Ange, Tusk and Vivian arrived in the castle, she shot on Vivian with a sedative and taken her away. After Ange wakes up in a hospital bed with a human Vivian who didn't remember how she get back her human form, Dr. Gecko said she adjusted her D-type gene regulatory factor and she should be able to maintain her human form without medication. She asked Ange if she was hurt everywhere and said Salamandinay must have gone easy on her. Suddenly they hear Tusk yell in the next room, where Ange and Vivian find a naked Tusk strapped to a table and surrounded by a bunch of young DRAGONs. Dr. Gecko thanks Tusk for cooperating as there are few humanoid males around and they learned a lot about sex, much to Ange's anger. (CROSS ANGE: "The Other Earth")

On the day of Ange, Tusk and Vivian's departure, she told Tusk that wanted to know more about his body and the next time they must experiment with mating. Ange however intervened, saying Tusk wasn't a rare specimen for her to experiment but her knight. She then watched with disappointment as Ange, Tusk, Vivian and the DRAGON army departed for the rescue of Aura. (CROSS ANGE: "The Black Angel of Destruction") 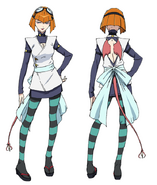 Retrieved from "https://crossange.fandom.com/wiki/Dr._Gecko?oldid=24942"
Community content is available under CC-BY-SA unless otherwise noted.