Unidentified metric tons
The EM-CBX001 Hysterica (ヒステリカ, Hisuterika?) is a Ragna-mail that appears in the CROSS ANGE Rondo of Angel and Dragon television series. It is "piloted" by Embryo. An absolute weapon built by Embryo, it was used to end war [1].

The Hyserica is built with great agility in mind, as even in Destroyer mode, it is able to dodge attacks and race at great speed. As it uses the EM-CBX001 unit number, it can be said that this is the machine that first applied the convergence theory of parallel worlds that allowed travel and eventually the secondary use as a WMD.

For melee combat, the Hysterica is able to generate an energy blade from its right forearm.

Like the Ragna-mail piloted by the Diamond Rose Calvary, Hysterica's primary ranged weapon is an energy rifle that fires bolts of plasma energy. While not as powerful as the decayed particle convergence cannons used by the Ryuu-Shin-Ki, it makes up for it with a faster rate of fire.

The figurehead of the Hysterica can fire a small anti-personnel beam. Embryo used it to mortally wound Elektra/Jill after she froze his human body with the freeze bullet installed into her prosthetic arm.

Mounted on each of its forearms, the beam shields can effectively block most beam and physical attacks, but can fluctuate if the attacks are too powerful.

The Hysterica's ultimate weapons, built into each of its shoulders and lower wings. They can only be activated when the "Endless Song" is sung. Unlike regular Para-mails and Ragna-mails, the Hysterica lacks the ability to store weapons on its wing binders or mount supplementary guns on its shoulders as the extra Space-time Convergence Cannons take up too much space.

Embryo arrived in time to stop Ange from killing Julio in the Villkiss. Instead he kills Julio himself by using the high-yield weapon, so Ange herself wouldn't dirty her hands by committing such an act. Afterwards he tries attacking Tusk who had fired at him. (CROSS ANGE: "Arzenal in Flames")

Hysterica being destroyed by Ange. 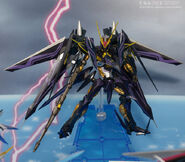 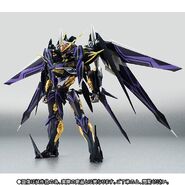 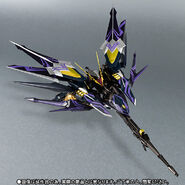 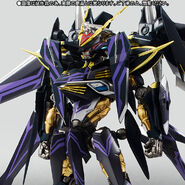 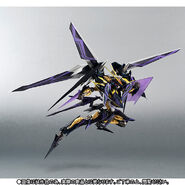 Embryo in Hysterica Mode dies at the hands of Ange's Ragna-mail.

Community content is available under CC-BY-SA unless otherwise noted.