The EM-CBX004 Theodra Michael Mode (テオドーラ ミカエル・モード, Teodōra Michael mode?) is a Ragna-mail that appears in the CROSS ANGE Rondo of Angel and Dragon television series. It is piloted by Hilda, a Norma. [1]

It has been adjusted accordingly to its mail-rider to specialize in bombardment for long-range combat. [1]

A special form of the Theodra, expressed by the pilots feelings. It captures the spatial phase energy in its surrounding, converting it to power for its equipment. Thus allowing it to use huge energy blades, whereas it can also generate an optical barrier. "Michael" means angel in charge of fire. Its armor changes to red while in the form. [2]

Upon activation the Theodra turns red and is completely surrounded by a glowing, red barrier which protects it from damage and turns the Theodra in flight mode into a powerful weapon which can destroy large targets by just flying through them. In this "mode" the Theodra utilizes a beam sword which can cut battleships apart with ease. (CROSS ANGE: "Arzenal in Flames")

When Embryo regained control over EM-CBX004 Theodra, Hilda used her newly acquired knowledge of the nature of the Ragna-mail to shake it off and awaken Theodra's Michael Mode. Together with Salia, she destroyed EM-CBX005 Victoria and EM-CBX006 Eirene.

Ater the activation of the Michael Mode. 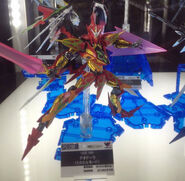 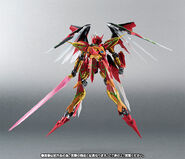 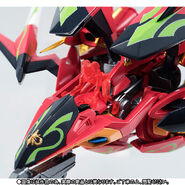 Retrieved from "https://crossange.fandom.com/wiki/EM-CBX004_Theodra_Michael_Mode?oldid=24099"
Community content is available under CC-BY-SA unless otherwise noted.