One of the absolute weapons, a Ragna-mail, was built to end war. It has a "lock" placed on it, because of this only someone of royalty, whom must also be in possession of a royal ring, can activate and use it correctly [1].

In this form, the Villkiss resembles its original form, Bilkis, with red stripes all across its body (hence its designation of EM-CBX007). However, its base color changes from black to white, signifying that it is no longer under Embryo's control.

Also known as Space-Time Convergence Cannons, they are two concealed weapons built into the shoulders of all Ragna-Mails, and are the Villkiss' most powerful weapons. In its final form, the Villkiss does not require the activation of its Uriel Mode or the song Towagatari in order to fire them. They are powerful enough to cancel out the Hysterica's Discord Phasers, as well as heavily damaging the Hysterica.

A rifle specifically designed to combat DRAGONs. It is shown to be fully automatic and fires ballistic rounds. It can be turned to a certain degree in flight mode for better accuracy. It has an underslung grenade launcher. This weapon was not used during Ange's final battle with Embryo.

As its name suggests, the sword is designed specifically to cut through the tough scales of Dragons. It is strong enough to pierce a Galleon-Class Dragon. It has the ability to generate a beam sword from its tip, similar to the Villkiss Michael Mode's beam sword.

During the DRAGONs' failed invasion of the Empire of Misurugi, when the Villkiss' assault rifle ran out of bullets, Salamandinay handed over Enryugo's beam rifle to Ange. The beam rifle is standard equipment for the three Ryuu-Shin-Ki. It is a large rifle that can fire a powerful energy beam. Unique to Enryugo's rifle is a bayonet attached to it for close quarters combat. However, the rifle's sheer size hinders mobility.

The Villkiss has two beam shield generators, one on each of its forearms. The beam shield can effectively block most beam and physical attacks, but can fluctuate if the attacks are too powerful.

The final and most powerful form of the Villkiss, it transformed into this form from its original form as Bilkis during the final battle with Embryo in the gulf between dimensions.

During Ange's battle with Embryo's Hysterica, it managed to match it in close quarters combat, eventually chopping one of its arms off. When the Hysterica retaliated with its Discord Phasers, the Villkiss cancelled it out with its own Discord Phasers before annihilating much of the Hysterica with another shot and finishing it off with a beam-coated sword slash.

With the destruction of the Hysterica and the death of Embryo, the Villkiss emerged out of the gulf between dimensions and safely landed in the original Arzenal of the True Earth. 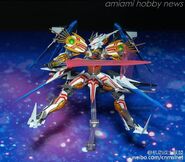 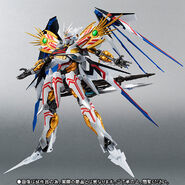 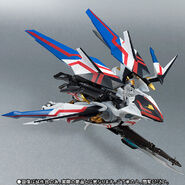 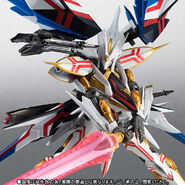 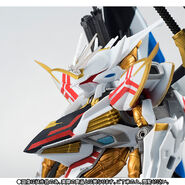 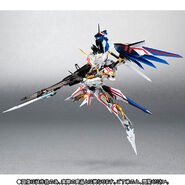 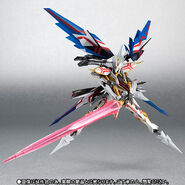 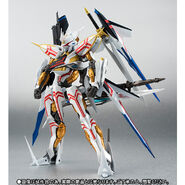 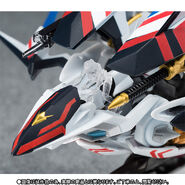 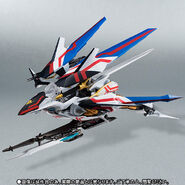 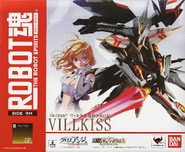 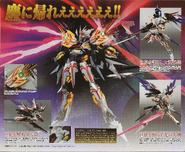 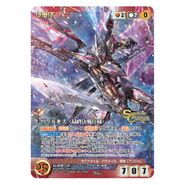 Retrieved from "https://crossange.fandom.com/wiki/EM-CBX007_Villkiss?oldid=25025"
Community content is available under CC-BY-SA unless otherwise noted.