Embryo (エンブリヲ, Enburiwo?) is a main antagonist of the CROSS ANGE Rondo of Angel and Dragon television series. He is the creator of the World of Mana, and controls it from the shadows. However, having deemed the World of Mana a failure, he currently desires to "destroy the world and create a new one". He owns the lost weapons and techniques of ancient times, like the Ragna-mail and is the "pilot" of the Ragna-mail EM-CBX001 Hysterica.

Embryo was once a kind man who only wanted peace. However, over time he grew tired of seeing war after war and watching the world in ruins. Believing that if things were to go on, humanity would eventually perish, Embryo eventually gave up on the Ancient Humans and decided to create a new humanity, a humanity whom in his eyes were gentle and intelligent with no desire for conflict.

Eventually, however, Embryo began to take his desire for peace too far. When the Norma appeared, Embryo decided to use the event to his advantage, by creating the belief that they are anti-social monsters, in order to give the world an enemy to direct their hatred against.

Nowadays, Embryo has shown to be haughty and self-assuming. He has also been shown to have somewhat of a god-complex, for example, believing that he can just simply "destroy the world and create a new one" if the current one does not operate in the way he wants it to. When Jill referred to him as "god", Embryo, through he also stated that he never called himself that, thought it was a fitting title. He is almost always seen with a smile on his face. However, despite this, Embryo does not seem to like unnecessary bloodshed. When Julio turned his retrieval mission into a massacre, he became enraged to the point that he saved Julio from being killed by Ange, just so he could kill Julio himself.

Embryo is a highly skilled Manipulator, researcher, and geneticist, having been the creator of Mana and by extension the very world's foundations by remaking the genetic makeup of humanity, however he never fully cured Humanity of its idiosyncratic hatred and discrimination, and thus uses the Norma as the Scapegoats for such things. He rules the world in a position of power higher up than any of the world leaders all of whom refer to him as Embryo-sama while he can refer to a king with the kun honorific without any backlash further emphasizing the godly role he plays and on top of it Jill even refers to him as "god" and even the mysterious Riza Rundog is wary of him. He also gave the Mana leaders the keys to remaking the world.

Despite possibly being the oldest character in the series, Embryo, because of unknown reasons, managed to maintain the appearance he had during his youth.

He can use the Light of Mana and is in fact its creator meaning that he probably knows all of its secrets, and for some reason can even use it on the Norma despite them usually "rejecting" mana.

He is able to communicate via realistic holograms, he can make no less than two or three at a time. With these "holograms" he can direct his powers through them while another could be doing an entire different thing completely (i.e. healing someone through two while a third "pilots" the Hysterica).

Through unknown means he can pilot a Ragna-Mail while either being or having a hologram be on its shoulder; however, it is revealed that his true body is within the Ragna-Mail thus, if his realistic hologram is incapacitated, then he would choose to reveal his secret as he uses his Ragna-Mail to talk. He can also sing the True Star Song to enable a powerful attack similar to the Enryugo and Villkiss' attack, however the Hysterica does not shine golden when he does so. This attack is so devastating that it left Riza Rundog, Tusk and Ange all in awe at its power.

Embryo has the power to cause great pain and pleasure to a person by tapping them on a key point on the side of the head. By tapping the middle for the forehead will cause untelled pleasure even the touch of the skin will cause them to moan. The second point is the side of the temple cause great pain causing them yell in pain. This power is way to break the spirit of this person making them do whatever he wants them do as will make them fall in love with him as he did to Jill which cause her to turn on her team. He has the powers in his eyes that will break there spirit for a short time which he did to Ange that caused her to remove her dress.

He was sick of humanity at war with each other and was determined to rid mankind of the desire to wage war, so he created the gene where one could manipulate with their mind the energy called Mana and thus make one's dreams come true. However, he could not prevent the birth of Norma (only females) who could defeat Mana users by disrupting Mana fields. So he, through the governments, declared Norma to be "Mana starved, anti-social, violent Humans seeking to destroy all that was Mana". With this falsehood, the Norma became the scapegoat, pariahs and necessary "evil" of Mana users' civilization and so were discriminated against harshly. He is the shadowy figure that created this World of Mana out of the old world.

Following the attack on Arzenal by the DRAGON's, the world leaders held a meeting inside a virtual space to discuss how this could have happened and what to do about it. Embryo attended the meeting, but decided to just sit back and read a book, not wanting to get involved with the world leaders and their politics. However, after the world leaders became afraid of the Norma revolting after a picture taken during the attack revealed that they were in possession of the Ragna mail Villkiss, Embryo called them "hopeless" and joined the meeting. He then claimed that if they choose to wipe out the Norma they would have to choose between two follow up options, "surrendering unconditionally to the DRAGON's" or "wiping out all the DRAGON's". The world leaders didn't like either of the two, however, Embryo then proposed a third option "destroy the world and create a new one". When the current emperor of the New Empire of Misurugi, Julio Asuka Misurugi questioned if such a thing was possible, Embryo claimed it is if the were to obtain all the Ragna-mail and their mail riders. Julio then immediately proposed the third option believing that the Norma being allowed to exist and the world needing them to fight the DRAGON's was a mistake all along. The Marmeria Republic General Secretary believed this to be foolish as it would force them to abandon all of the worlds development, however, not having a better option, he and the other world leaders were forced to go along with the plan. Embryo then gave Julio a key that would give him the ability to use "the tools in the yard". He and the world leaders then left the virtual space. Later, when Julio was about the arrive at Arzenal with an army to wipe out the Norma, Embryo used a hologram to appear in front of Arzenals commander in chief, Jill, whom he had history with. Having overheard her refer to him as "God", Embryo stated that he never called himself that, through he also stated that it may be fitting title since he is a creator. Jill then immediately used a gun to shoot him but it had no effect, since he was just a hologram. Embryo then claimed that she looks beautiful when she is angry and called her by her old name, Alektra, but then switched to Jill. He left when Julio's fleet released a false massage saying that they were coming to deliver supplies. (CROSS ANGE: "Her Right Arm's Past")

He met Ange in the cafeteria where they were corps burned everywhere by saying her that she only realized what matters to her after she lost it and qualified Julio's massacre as a heinous deep and that he didn't remember for having permitted this. He informed her that it was her brother that ordered this massacre and he indicated her his position by saying that Julio came to make mincemeat of her. After that Chris's Para-mail exploded, sending her and what's left of her Para-mail failing to their doom, he appeared before Chris's body walking slowly towards her and he approached Ersha who cried the death of the children Arzenal. Soon after Ange prepared to deliver the killing blow on Julio but he interfered using his EM-CBX001 Hysterica Ragna-Mail to stop her, he said her anger was pure and white and she was like a burning flame, rising up against injustice absurdity. While he spoke to Ange he was seen resurrecting Chris and a children Arzenal. He continued by saying her that he can't let such a flame be tarnished by burning up things of no value and he will carry the burden of her sin and suddenly sang the "Endless Song" and activated its powerful attack, annihilating Julio's naval fleet in process. Ange asked him who is he but Tusk arrived and fired him by saying Ange that this man is dangerous and she had to get away. He set his sights on Tusk and Vivian and sang again, Ange tried to save Tusk, the ring reactivate and turned the Villkiss into blue. Hysterica shots but Villkiss suddenly disappears along with Tusk and Vivian. He said that it was a boring plot but it wasn't bad. (CROSS ANGE: "Arzenal in Flames")

He created the World of Mana by taking the first DRAGON, Aura and used her life force as energy, while making the Norma and DRAGONs fight each other in order to harvest the Dracunium crystals that are inside the bodies of the DRAGONs in order to re-supply Aura. (CROSS ANGE: "The Other Earth")

He looked the fight between the black Villkiss and the DRAGONs in a torture chamber with a Riza imprisoned by saying her thanks to the information that she provided her friends are being massacred. Shortly after he ordered to Salia to capture Ange. (CROSS ANGE: "The Black Angel of Destruction")

When Ange was being captured as hostage by Embryo, it was shown that Embryo has a deep interest in Ange and trying to 'tame her'. He stated that he has 'waited for her for thousands of years' and no one will be able to take him away from her. His several attempts of trying to manipulate her and torturing her to accept him still failed due to Ange being in love with Tusk.

Being hurt by Ange's remark about his tea.

Embryo in the second ED. 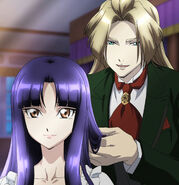 Embryo in a Angry way drops Salia after punishing her for failure.

Embryo in Hysterica Mode dies at the hands of Ange's Ragna-mail.

The Death of Embryo in Human body dies at the hands of Tusk in Extended Version.

Ange and Embryo in the Misurugi Dawn Pillar's Lair.

Embryo becomes very Angry at Salia that she let Ange escape from him and because of her failure and her weaknesses.

Embryos attacks Ersha with his hands because of her weaknesses (Extended Version).

Embryo and the 4 members of the Diamond Rose Knights (Extended Version).

Retrieved from "https://crossange.fandom.com/wiki/Embryo?oldid=25320"
Community content is available under CC-BY-SA unless otherwise noted.