Knight (Diamond Rose Knights)
Irma Kankkunen (イルマ・カンクネン, Iruma Kankunen?) is a supporting character that appears in the CROSS ANGE Rondo of Angel and Dragon television series. She is the pilot of the Ragna-mail EM-CBX006 Eirene.

Very little is revealed about Irma's character although a scene where Embryo models for one of her paintings suggests she has an artistic streak.

She, Tanya, and other pilots are deployed to combat the invading force attacking Arzenal. She is captured in her para-mail by the Pyrethroids. (CROSS ANGE: "Arzenal in Flames")

After Embryo in turn purges Julio, however, the experience leaves her resentful against the mana society enough to be recruited into becoming his Ragna-mail pilots. When the DRAGON attack again via the Singularity Point, she engaged immediately the fight against them to board of her new Black Ragna-Mail with her Knight leader Salia, Chris, Ersha and Tanya. When Ersha informed Salia that the DRAGONs retreated and she ordered her and Tanya to pursue them but not to go too far. (CROSS ANGE: "The Black Angel of Destruction")

She continues to cross swords with both Libertus forces and DRAGONs on a few more occasions. But after Embryo's plan to merge both the Mana Earth and the Real Earth fails following the liberation of Aura, Embryo abandons Diamond Rose Knights to die by teleporting them into the midst of a massed group of DRAGONs and forcing them to fire by remote control. Her Ragna-mail is rammed and destroyed by one of the DRAGONs, and she is confirmed as killed in action during the epilogue. She is given burial alongside all other Normas killed during the conflict. 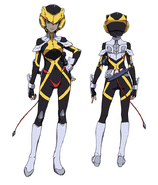 Ilma painting Embryo while he is posing in front of her. 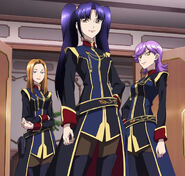 Retrieved from "https://crossange.fandom.com/wiki/Irma_Kankkunen?oldid=25223"
Community content is available under CC-BY-SA unless otherwise noted.