Istvan (イシュトバーン, Ishutobān?) is a character that appears in the CROSS ANGE Rondo of Angel and Dragon television series. A member of the Ancient Humans, he's the husband of Norma Vanessa and the father of Tusk.

Not much is revealed about Istvan's past and character. However, Alektra held him in high regard as shown when she berated Tusk for allowing Ange to escape with Villkiss and being subsequently captured by Embryo, saying that Tusk had failed Istvan's legacy.

Istvan was one of the survivors of the race of humans that predated the World of Mana. After having stolen the Villkiss, he and the others went to Arzenal in search for allies. During this time, he fell in love with a Norma woman named Vanessa with whom he conceived a son, Tusk. Eventually, an exiled Princess named Alektra arrived at Arzenal who was chosen to pilot the Villkiss with Istvan assigned to be her knight protector. Unknown to Istvan, Alektra had secretly fallen in love with him which Embryo used to his advantage to seduce her into betraying the first Libertas, causing not only its failure but the death of both Istvan and his wife.(CROSS ANGE: "Her Right Arm's Past") 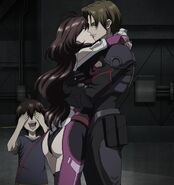 Istvan’s (along with his wife, Vanessa) Death.

Retrieved from "https://crossange.fandom.com/wiki/Istvan?oldid=24891"
Community content is available under CC-BY-SA unless otherwise noted.