Jasmine (ジャスミン, Jasumin?) is a supporting character that appears in the CROSS ANGE Rondo of Angel and Dragon television series. She is the shopkeeper of the market, "Jasmine Mall" at Arzenal. She's always accompanied by her dog, Vulcan.

She is greedy with money, but has shown to care about her fellow Norma, believing that it is unjust that they are only allowed to live as weapons to fight the DRAGON's.

She is shown to be serious and maternal such as when she scolded Jill for her harsh treatment of Salia stating “if you, “Jill” had been a little nicer to Salia maybe she would still be on our side”.

She is responsible for the conception and maintenance of Jill's artificial arm. (CROSS ANGE: "Unyielding Spirit")

She mourns the fallen mail-riders while Ange creates their graves with the tombstones that she gave her. (CROSS ANGE: "Villkiss Awakens")

She is one of the few that is aware of the plan, "The Libertus". When Ange buys a new uniform and she tries to lecture her due the people disliked her but Ange ignores her comments. (CROSS ANGE: "A Loner's Revolt")

She well aware and informed about the many goings on within the top command of Arzenal, and is the one in charge of keeping in contact with Tusk. She knew Salia's secret hobby. (CROSS ANGE: "Salia's Depression")

During the "Festa Festival" she narrates the Sport Festival events. After the escape of Ange, Momoka Oginome and Hilda, she scolds Vulcan for allowing Ange to take weapons and to be bought out cheap.(CROSS ANGE: "Bikini Escape")

Salia and Mei recollect a certain incident which Jill, formerly known as Alektra, arrives wounded who is in care by Jasmine who asked her what happened, she replied that she has a message for Mei from Fei-Ling but Jasmine says that she can deal with that later. She started to cry and apologizes to Jasmine for not being good enough and announced that Fei-Ling, Vanessa and the knight's family are dead and says that she couldn't handle the Villkiss. (CROSS ANGE: "Dragon Song")

She collected the corpses of Scuna-Class DRAGONs in a big hole with a backhoe loader. Jill narrates to Ange that she formed an alliance with the Ancient Human. After to have thrown the last Dragon in the hole she burnt theirs corpses by saying to Ange to stay away who discovered that the DRAGONs are humans. (CROSS ANGE: "Her Right Arm's Past")

She warned the girls of Julio's attack on Arzenal, she heard Jill ordered the entire staff to ignore the message and prepared to defend themselves and initiates the Operation Libertus. She and Vulcan escorted Salia which had to bring Ange to the submarine, she carried Momoka onto her shoulder but Ange becomes stubborn and defiant to Salia. At a moment Momoka said Ange to hold her breath and threw pepper and manage to escape. After this she was seen aboard the Aurora with her dog and Emma Bronson. (CROSS ANGE: "Arzenal in Flames") 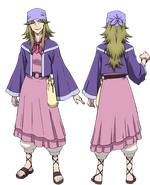 Jasmine in the second ED.

Young Jasmine helping Young Alektra in order for her to pull herself together.

Jasmine and the rest of members of the Normas.

Retrieved from "https://crossange.fandom.com/wiki/Jasmine?oldid=24086"
Community content is available under CC-BY-SA unless otherwise noted.