Kaname (カナメ, Kaname?) is a supporting character that appears in the CROSS ANGE Rondo of Angel and Dragon television series. She is a DRAGON that pilots the Ryuu-Shin-Ki, Hekiryugo.

She appears to be somewhat more friendly and kind than her partner Naga.

She seems to have the ability to control DRAGONs, as seen when she rode a Galleon-Class DRAGON.

Kaname was riding a dragon DRAGON when she and Naga burst into Ange and Tusk's room at Hotel Mu La Flaga. She asked if they were the ones who sent the distress signal and welcomed them to their world the true Earth. (CROSS ANGE: "Ange and Tusk")

She and Naga escorted Ange, Tusk and Vivian to a castle in the mountains and said the High priestess will see them. She was furious by the behavior of Ange to the High priestess and her council and threatened her with her sword. Things look grim until Salamandinay offered them hospitality and ordered to her and Naga to dismiss despite their protests. During the tea ceremony, Ange's patience runs thin and she attempts to take their hostess hostage, she and Naga arrived and ordered to Ange to release her by taking Tusk hostage. Salamandinay decided to show to Ange the truth and ordered to Naga and Kaname to stand guard before leaving with Ange. Shortly after she was very moved to tears when Lamia was reunited with her daughter Mii, Salamandinay decided to prepare a festival for her return. During the festival she and Naga meet with Ange and Tusk asking them to learn about them, and they in turn want to learn. (CROSS ANGE: "The Other Earth")

One morning she, Salamandinay and Naga invited Ange and Tusk to take breakfast with them and joined Lamia and Vivian. After that Lamia brought Vivian for shown her the house where she was born, they go to a stadium at Salamandinay's suggestion afterwards and Ange and Tusk are surprised that the place is still in almost perfect condition today. Naga tells them that it is thanks to Salamandinay that the building, which is more than 500 years old, was able to be restored to good condition and preparing to talk Ryuu-Shin-Ki before being stopped by Kaname saying that is confidential. She assisted to the competition between Ange and Salamandinay in different sports and was very surprised to see Salamandinay laughed. When an unstable singular point appears, Salamandinay ordered her to notify the High Priestess. (CROSS ANGE: "Resonant Battlefront")

In the evening, after hearing Ange's choice, she arrived with Naga and Salamandinay who said that she will be forced to fight her again, Naga said that she was dangerous and she known too much about them but Kaname told her Ange saved the townspeople, Naga added that it's not that long ago they were trying to kill each other and they should take her into custody. Ange informed that she didn't intend to fight them any longer to the surprise of Naga, Salamandinay told her that she respects her decision saying she felt free to return to the other side when the singularity opened in the morning and she will have Kaname and Naga escort her if she required. Despite the protest of Naga, Salamandinay told her that she should not be surprised that she trusts a friend and said Ange they will finish their competition when the battle will be over. The next day, after the arrival of several DRAGONs and the speech of High Priestess, she boarded into her Hekiryugo and followed the lieutenant guardian Salamandinay. After to have traversed the singularity, she noticed that they were 48,000 northeast of their destination coordinates, Kaname said that the singularity was supposed to open over Misurugi, they were suddenly attacked by missiles and noticed five black Villkiss who engaged the fight against them. Salamandinay said she and Naga that this was an ambush and ordered to all units that their priority was defeated the enemy. Shortly after, she informed Salamandinay that the right flank was down thirty percent who finally ordered to all units to retreat to the singularity and returned with the others DRAGONs in their world. (CROSS ANGE: "The Black Angel of Destruction") 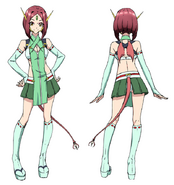 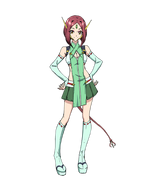 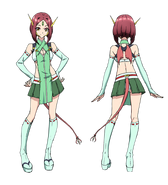 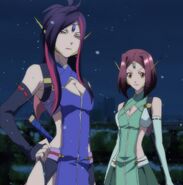 The first appearance of Naga and Kaname.

Ange and Tusk are being confronted by Naga and Kaname.

Kaname and Naga in the Dragon Clan Festival.

Ange, Tusk, Kaname and Naga in the Dragon Clan Festival.

Naga and her Partner Kaname.

Retrieved from "https://crossange.fandom.com/wiki/Kaname?oldid=24449"
Community content is available under CC-BY-SA unless otherwise noted.