Lamia (ラミア, Ramia?) is a supporting character that appears in the CROSS ANGE Rondo of Angel and Dragon television series. She is Vivian's mother.[1] She is part of the Sylphis Clan of DRAGONs.

Vivian describes her as having the same scent as Ersha, suggesting a gentle and loving demeanor. Though saddened that Vivian has to return to the World of Mana in order to help her friends, she supports her daughter's decision so long as she promises to come back to her.

Salamandinay confirmed by genetic testing that Vivian was her daughter and she was the missing daughter of Sylphis "Mii". She cried and hugged Vivian who said she had the same smell as Ersha and asked her who was she, Lamia replied her she was her mother. Vivian asked what a mother was, Salamandinay replied her she was the person that gave birth to her. Ange asked to Salamandinay explanation who said she must have wandered into the other world while chasing after her mother and decided to prepare a festival for her return. (CROSS ANGE: "The Other Earth")

One morning, she had breakfast with Vivian and are joined by Ange, Tusk, Salamandinay, Kaname and Naga. Salamandinay asked them if they slept well she replied they stayed all night to talk and Vivian said she was so tired. After that, Lamia wanted to show her the house where she was born and left the other. When they discussed, they felt an earthquake they get out of the house and discovered the unstable singular point. Salamandinay ordered them to escape to the temple, when Lamia saw an object went in their direction and she shielded her daughter and is crushed by a Iaria vehicle and asked to Vivian if she was all right. She asked to her mother why she did that who replied her that it was the mother's duty to protect her child and started to cry, Tusk joined them and held Vivian to save her mother who asked to Mii to leave but she refused to leave without her. After this incident she was very happy that her mother has been saved. (CROSS ANGE: "Resonant Battlefront")

In the evening, she thanked Ange to have protected them and to have saved their town, Ange said that she wanted just help Salamandinay and regretted not having saved everyone. After the dinner, Vivian informed she was leaving tomorrow, Lamia brought her baby clothes by saying she has gotten so big since she wouldn't fit in this anymore and she should value the friends she met during her process of growth. She said her that she didn't worry about her injury and hugged her by thanking her to coming back and she was happy to meet her again. Vivian promised Lamia that she will return back to her. The next day, she assisted to the departure of her daughter and DRAGON's army. (CROSS ANGE: "The Black Angel of Destruction") 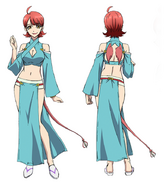 Lamia happier reunites with her Daughter Vivian in tears.

Salamandinay, Lamia and Vivian in the Dragon Clan Festival.

Vivian and her Mother Lamia in the Dragon Clan Festival.

Lamia Laughing when her Daughter eats in a funny way.

Lamia and her Daughter Vivian.

Retrieved from "https://crossange.fandom.com/wiki/Lamia?oldid=25243"
Community content is available under CC-BY-SA unless otherwise noted.