Pilot (First Troop)
Miranda Campbell (ミランダ・キャンベル, Miranda Kyanberu?) is a supporting character that appears in the CROSS ANGE Rondo of Angel and Dragon television series. She is a recruit who was assigned at the same time as Coco at Arzenal. She is a Norma who pilots the Para-mail AW-CBR115 Glaive.

She was a new cadet, and also taught Ange how to shop. (CROSS ANGE: "Unyielding Spirit")

After Coco's death, she tries to stop Ange from deserting, but was ejected from her Paramail, and devoured by Scuna-class DRAGON's. (CROSS ANGE: "Villkiss Awakens") 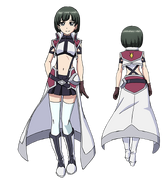 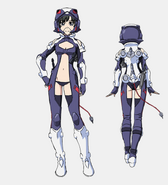 Miranda crying after the death of Coco.

Miranda after being ejected from her Paramail.

Miranda being eaten to death by the Schooner-Class Dragons (Extended Version).

Retrieved from "https://crossange.fandom.com/wiki/Miranda_Campbell?oldid=23707"
Community content is available under CC-BY-SA unless otherwise noted.