Momoka Oginome (モモカ・荻野目, Momoka Oginome?) is a supporting character that appears in the CROSS ANGE Rondo of Angel and Dragon television series. She is former First Princess Angelise Ikaruga Misurugi's personal maid. Momoka followed Ange to Arzenal to remain as Ange's maid despite Ange being a Norma.

Momoka's dedication towards Ange is so great that, after Ange is taken to Arzenal, she stows away on a transport ship to find her. (CROSS ANGE: "Momoka's Here!")

Momoka was always aware that Ange was a Norma but never thought differently of her for it. She's clumsy and sometimes dense, but very diligent and dedicated in serving and caring for Ange. Ange's reckless actions are always a cause for concern for Momoka, at one point trying to prevent Ange from leaving for a mission due to her bad cold. Momoka is Ange's emotional support in both good and bad times, seeing her not only as a master but as part of her family.

Momoka is the only user of Mana that doesn't discriminate against the Norma, even those other than Ange. She also seems to be genuinely concerned about them as well, especially as the relationships of the other Norma with Ange improve. At one point during a battle, Momoka makes food for the members of the team aboard the Aurora to help keep up their energy.

She has the ability to use the Light of Mana and can be quite handy with a frying pan, both for cooking and in combat.

Momoka has a strong will. When Embryo attempted to control her and force her to attack Tusk, Momoka managed to break free of his control and retaliated against Embryo.

She is Angelise's maid, who had been serving her since childhood and a student who is a member of the Iaria team of the Ho-o Institute. For many years, she always used Mana to protect and serve the Princess. By order of former Emperor Jurai Asuka Misurugi, the royal family hasn't needed to use Mana themselves. During the Baptism Ritual ceremony, she was shocked when Angelise is discovered to be a Norma. (CROSS ANGE: "Fallen Princess")

She stowed away on a transport that delivers supplies to Arzenal. After being discovered and caught, Ange was surprised that she was there. Despite her being delighted to see Ange, Ange becomes cold towards her, and resents her because she knows that she is a Norma. She continues to assist and impress Ange despite the maltreatment and resentment until Ange orders her to bathe together. While bathing, she recalls a gash on her arm from when she accidentally broke a doll, and Ange having been the one to treat the wound. She admits that she is envious, yet dedicates herself to serving Ange despite the harsh treatment. Ange having replied, that she must leave, their bath becomes interrupted by an alarm sounding for an offensive. The next day, she is about to leave Arzenal, but with a last minute ditch effort, Ange halts her departure by "buying" her using her money from the previous sortie which Jill accepts knowing that Momoka would have been executed for discovering the existence of Arzenal and the DRAGON's, both of which are highly classified information. (CROSS ANGE: "Momoka's Here!")

She now lives with Ange in the latter's room continuing her duties as Ange's maid and confidant. She intercepts an emergency Mana message where, Sylvia Ikaruga Misurugi asks if she found Ange, then screams while being taken away. (CROSS ANGE: "Salia's Depression")

During the "Festa Festival", she receives a Mana message from Emma Bronson, saying that Misty Rosenblum wanted to meet Ange, but Ange refuses and decides to disappear by wearing the Perolina costume. She searches for Ange and Hilda talks to her at gunpoint. Hilda commands via gunpoint to her, to control the Personal Transport, but she refuses saying that she only responds to Ange. Ange sees them as well, pointing her gun at Hilda. Ange demands to use the transport, but Hilda tells her that she knows, the Hangar's mechanisms being forcefully released would set off an alarm to all of Arzenal. Forming an unlikely alliance, Hilda frees the transport and Ange tells Momoka to fly the aircraft. As the transport begins taking off, Ange initially refuses Hilda boarding the plane and tells Momoka to close the rear hatch, but she hesitates to do it. After listening to Hilda's reasons, Ange accepts and lets her board the plane as it leaves Arzenal. After reaching their destination, Hilda, along with Ange and Momoka part ways, telling one another that they each must survive to meet again. Ange and Momoka head towards the Empire of Misurugi. (CROSS ANGE: "Bikini Escape")

Ange and Momoka prepares their advance on the Misurugi Palace. They head to the Iaria hangar and met Akiho, who is terrified upon seeing Ange. As they get an Iaria vehicle, Akiho attempts to make an emergency call but Ange quickly notices Akiho's call and ties her up. As they maneuver around the imperial capital, they were being ambushed and chased until Ange heads to a hidden passage. As they reached the imperial palace, Ange was being confronted by imperial guards and rescues Sylvia. However, Sylvia slices Ange's left arm and despised her, blaming to her paraplegic status and the death of her mother. Momoka was very shocked when she heard Sylvia's resenting words for Ange and being captured by the imperial guards. (CROSS ANGE: "The Hometown of Betrayal")

When Ange is whipped by Sylvia, she begs her to stop, saying that such an act is cruel. Julio thanked her for giving them the opportunity to dispense justice, revealing that he was the one who exposed Ange's identity at the Baptism Ritual. Having waited for any news of her being devoured by a monster after she was sent to hell, yet she survived much to his surprise after having sent Momoka without any knowledge. She is shocked by Julio's words and after he announced Ange's execution, her former schoolmates from the Ho-o Institute, say that she must be executed because she is a Norma and not a human. She tried to reason with the crowd by saying that it's not her fault, that she didn't do anything wrong, and that she found happiness thanks to her. Although the citizens of Misurugi ignore her, chanting "Hang her", she is then hanged. Tusk suddenly saves Ange and ends up in an awkward position. Ange, Momoka, and Tusk escape the empire with Ange wounding Julio's face using a flying blade. As they head to Arzenal, Momoka apologizes to Ange, but she says that she feels refreshed thanks to her. Momoka questioned Ange about her relationship with Tusk, whom answered to have a special relationship. Momoka was very grateful to him for having saved Ange's life. (CROSS ANGE: "Goodbye from the Gallows")

She pleaded a prison officer to give food to Ange. Shortly after the attack of DRAGONs on Arzenal, a Scuna-Class Dragon destroyed the prison, she delivered Ange and Hilda by saying that they should to take a bath. (CROSS ANGE: "Dragon Song")

She comforts Ange after to have discover that the DRAGONs are humans. (CROSS ANGE: "Her Right Arm's Past")

When she heard the "rescue message" , she was initially very happy before the attack of Julio on Arzenal. She heard Jill proclaimed the rebellion against the humans with Ange. When Julio's troops make way to Arzenal and start killing people, she and Ange are forcibly taken by Salia and Jasmine but manage to escape by throwing them pepper and then head to the cafeteria where they discovered corps burned. Ange started to cough and decided to bring some water but she is attacked and injured by two soldiers of Julio troops but Ange saved her and interrogated one of the soldiers who revealed that he was just followed the orders of Julio before to be killed by several bullets by Ange who decided to head out and confront Julio. After that Ange heads to the hangar, she said Hilda to take care of Momoka. She is seen aboard of Aurora with Maggie and Mei. (CROSS ANGE: "Arzenal in Flames")

One night, she, Hilda and Rosalie headed to Arzenal and she was very happy to find Ange on the beach with Vivian and Tusk. (CROSS ANGE: "The Black Angel of Destruction")

While rescuing Ange from Embryo, he twice mind-controlled her through her Mana, but Ange snapped her out of it by reminding her that she was her top maid. Breaking out of his control the second time, Momoka sacrificed her life by using her Light of Mana to its fullest extent. She pierced Embryo with his sword and summoned a large vehicle to strike them both down, killing her in the process, not not before she told Tusk (who sacrificed himself shortly afterwards) to look after Ange. To Ange's horror, Momoka's lifeless body fell off the cliff to a chasm below and the vehicle after her, causing a humongous explosion (CROSS ANGE: "The One Left Behind") . Later, it was revealed that Momoka was able to survive when the frying pan that she hid in her clothes protected from the bullet that was meant to kill her. However, she was unable to use Mana anymore (CROSS ANGE: "Necessary") . 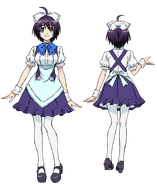 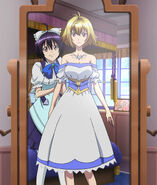 Ange as Perolina and Momoka.

Ange and Momoka in the Arzenal Beach Party Festival.

Ange, Hilda and Momoka in Prison during the war with the Dragons.

Ange, Hilda and Momoka running in the Cafeteria.

Ange, Hilda and Momoka arrives at the Para-mail's hanger.

Ange, Hilda, Momoka, Vivian and Tusk on a Promotional poster.

Retrieved from "https://crossange.fandom.com/wiki/Momoka_Oginome?oldid=25239"
Community content is available under CC-BY-SA unless otherwise noted.