Olivier (オリビエ, Oribie?) is a supporting character that appears in the CROSS ANGE Rondo of Angel and Dragon television series. She is the Novice Communications Operator for Arzenal. She tries to keep up daily with Pamela and Hikaru.

She is present relaying to everyone in the command center that they'd lost contact with Coco Reeve's (CROSS ANGE: "Unyielding Spirit")

She was angry for not being able to participate in the "Festa Festival". She was apparently knocked out by Hilda with her gun. (CROSS ANGE: "Bikini Escape")

In the middle of the day, Pamela informed Jill that a singular portal opens above Arzenal and a vast array of Scuna-Class DRAGONs approached, Emma Bronson who had a violent reaction and fired in every direction when a Scuna DRAGON destroyed the Command Center before to be knocked unconscious by Jill who decided to abandon the command center. Like Hikaru and Pamela, she was quite surprised when Salia defied Jill for to use the Villlkiss. (CROSS ANGE: "Dragon Song")

She, Pamela and Hikaru heard Emma scream and are scared by Vivian transformed into a Scuna-class DRAGON. (CROSS ANGE: "Her Right Arm's Past")

With Pamela and Hikaru she heard the "rescue message" but Jill orders them to ignore the message and prepare to defend themselves as she initiates Operation Libertus. Jill asks them what will they do, the three Communications Operators replied that they will come with her. Upon arriving to the submarine, Jill placed Olivier on the communications. (CROSS ANGE: "Arzenal in Flames")

Olivier angry for being uninvited for festival. 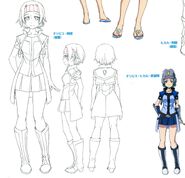 Pamela, Hikaru and Olivier becomes paranoid when they saw a Dragon.

Hikaru and Olivier about to aboard Aurora.

Alektra, Pamela, Hikaru and Olivier are about to aboard Aurora.

Retrieved from "https://crossange.fandom.com/wiki/Olivier?oldid=24091"
Community content is available under CC-BY-SA unless otherwise noted.