Rosalie (ロザリー, Rozarī?) is a supporting character that appears in the CROSS ANGE Rondo of Angel and Dragon television series. She is a light artillery member of the First Troop. She is a Norma who pilots the Para-mail AW-CBR115 (RS) Glaive Rosalie Custom.

During Julio's attack on Arzenal, she decided to join the "Libertus", along with Hilda and Chris.

She has short orange hair and sharp blue eyes. Her figure is the second bustiest in the first troop after Ersha and she wears the top of her uniform open as a result.

She is rather obsessed with money and is often agitated when the opportunity to gain more is withheld from her. She and Chris were both part of Zola's harem and later became Hilda's after their former captain's death. When Chris joins the Diamond Rose Knights she becomes heartbroken and feeling lost without her.

She isn't very skilled, but has survived up until now by tagging along with someone who has power.

Due to Ange being directly responsible for Zola's death, she hates the fallen princess and tries to get revenge by bullying her constantly, however, much to her chagrin, Ange manages to get back at her, on one instance she laced Ange's water with laxatives only for Ange to give her mouth-to-mouth causing her to swallow the water forcing her to run to the nearest stall. She, together with Hilda and Chris engage in a form of ménage à trois in Zola's room which is now owned by Hilda. (CROSS ANGE: "A Loner's Revolt")

After she and the rest of the unit was saved by Ange from a new and very powerful DRAGON, she finally accepts and befriends Ange much to Hilda's anger as she still holds a strong grudge towards Ange over Zola's death. (CROSS ANGE: "Salia's Depression")

During the "Festa Festival" she was seen gambling on a pig racing. After having participated in the Sport Festival, she was impressed by Chris' victory. (CROSS ANGE: "Bikini Escape")

After Hilda's return in Arzenal, she and Chris visited him in prison Rosalie asked her why she deserted and why wouldn't she talk to them, by affirming they are friends but Chris realized that she never thought of them as friends , Hilda confirmed and says that she was just playing along with them. A furious Chris spat in Hilda's face and says that she should have died and that she bought Zola's room. (CROSS ANGE: "Goodbye from the Gallows")

She defended the base of the attack of Scuna-Class DRAGONs and heard a strange song. After that the mysterious Para-mail destroyed the half of island, Jill sent Salia's squadron to intercept the enemies. After Ange's fight, they returned to Arzenal. (CROSS ANGE: "Dragon Song")

Jill deputizes Hilda as interim squad leader while Salia is in detention for disobeying orders. She and Chris grumble in the first instance but accept when Hilda proposes them her place. When the report of a dragon survivor arrive, Hilda ordered to her and Chris to cover the residential area. After that the DRAGON fly around at outside Arzenal it meet Ange and it make a voice like Ange's song by hum, Rosalie looked Ange sang the song. Right after the song as ended the DRAGON change into Vivian, by following Ange and she discovered with the others that the DRAGON are humans. (CROSS ANGE: "Her Right Arm's Past")

As Julio's fleet advances to Arzenal, Jill orders the entire staff to ignore the message and prepare to defend themselves as she initiates Operation Libertus. She asked about the rebellion, Hilda replied its die following the commander's orders or be killed by the humans, Hilda accepted and said to Jill that she awaited orders surprising she and Chris and Hilda said that she despised and hated the humans and it was a good time to fight back. Ersha rejoined Hilda with Arzenal children and said that she had to protect what's precious for them. Chris proclaimed that they could not defy the humans and survive, Hilda proclaimed that they wouldn't know until they tried. She headed to the Para-mails along with Chris, Hilda and Ersha where they were soon joined by Tanya and her squad to aid in the fight against the humans. When the Tanya Squad takes off she asked if they are going to fight the humans, Chris notices metallic disk-like that soon produce spikes and attack the lift off pad trapping the remaining Mail-Riders without their Para-mails seconds before the power went out. After to being informed that Arzenal was infiltrated Jill informed to the all units that the enemy's objective is Villkiss and they brang it to the lowest underground level. As the Maintenance Crew attempted the move the Villkiss down manually they were soon brought under fire by Julio's forces. She complained when they shot and broken one Gatling Gun of her Para-mail. Chris than lost all hope and was about to be shot when Hilda shielded her from an attack and retaliated against the attacker. When Chris questioned why Hilda responded that she doesn't let anyone die because that is what the first squad is about. The group continued to hold their position until an explosion above them sealed the elevator shaft stopping them from bringing down Para-mails, she asked Hilda what it has planned. Soon after Ange came rushing into the battle, shooting the enemy taking the Villkiss and clearing away the path with her weapons and leaves Arzenal. Hilda said that she had to go too for save everyone. Shortly after she, Hilda and Chris prepared for take off with Chris finally acknowledging Hilda as captain, however as they were setting off a survivor from Ange's attack came to and shot Chris in the head, making her crash into a support column. She contacted Chris and told her that she'd save her, with Chris, barely conscious thanking her but in the midst of saying her name. She saw her Para-mail exploded, sending her and what's left of her Para-mail failing to their doom. She started to cry and said furiously that she'll kill all of them. After the death of Chris, she fought with anger the Mana powered drones. (CROSS ANGE: "Arzenal in Flames")

One night, she, Momoka and Hilda headed to Arzenal and was very surprised to find Ange, Tusk and Vivian. She seemed frightened when she saw Vivian. (CROSS ANGE: "The Black Angel of Destruction")

Rosalie when she was 10 year old.

Rosalie has been backfired by Ange when she tries to pull a prank.

Rosalie's Prank has been Backfired by Ange.

Hilda and Rosalie defending themselves from the Mana Soldiers.

Rosalie becomes very angry and fighting off the Pyrethroids.

Naomi and Rosalie in (Rosalie's Ending).

Hilda and Rosalie Arrives at the Arzenal's Ruins (Extended Version).

Hilda and Rosalie in their bedroom. 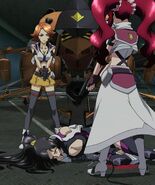 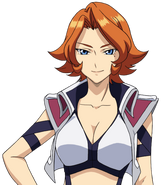 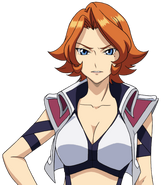 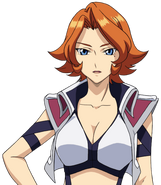 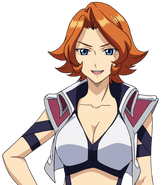 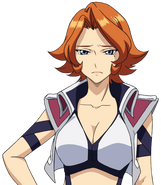 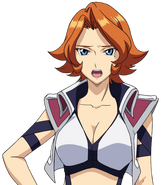 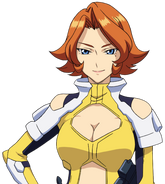 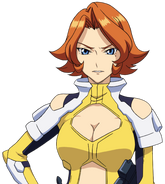 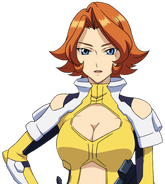 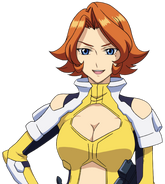 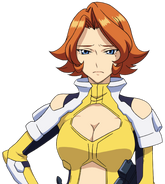 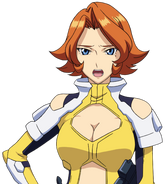 Retrieved from "https://crossange.fandom.com/wiki/Rosalie?oldid=25639"
Community content is available under CC-BY-SA unless otherwise noted.