Salamandinay (サラマンディーネ, Saramandīne?), is a supporting character that appears in the CROSS ANGE Rondo of Angel and Dragon television series. She pilots the Ryuu-Shin-Ki, Enryugo, and is a member of the DRAGONs.

Sala is a beautiful young woman with a thin but well proportioned build. Her eyes are sky blue and her hair is jet black which drapes down her back. Like all of her people, she has a pair of draconic wings sprouting from her back and a whip like tail. Her standard outfit is a pink tunic and red skirt, the latter of which she discards when piloting Enryugo. Thigh high tabi socks and arm length white gloves complete her outfit.

Sala seems to like fighting strong opponents, as seen when she choose to fight Villkiss herself rather than letting her teammates do so for her.

However, despite her battle loving nature, when she and Ange confronted each other face to face, she appeared to be a rather kind hearted person.

Sala's piloting skill is great enough to allow her to fight on par with Ange. She is also skilled enough in hand-to-hand combat, and ability to fly allows her to easily subdue Ange.

She is able to control DRAGON's through singing. She is also able to sing the "True Star Song", which is used to power the Enryugo it's High-Yield Cannons.

She has the ability to sprout DRAGON like wings and a tail.

She appears by singing with two others Ryuu-Shin-Ki's from the singular portal after the attack of Scuna-Class DRAGONs on Arzenal. Her Ryuu-Shin-Ki becomes golden and shoots two powerful beams to Arzenal who destroys the half of the island and killing Eleanor and Betty Squadron. After defeating Salia, Ange who now flying Villkiss, engages the mysterious Ryuu-Shin-Ki which they fire shots and land blows on each other. The mysterious Ryuu-Shin-Ki suddenly stops and the pilot starts singing. Ange responses also by singing, which the Royal Ring started interacting with the Villkiss. As they sing and their beams shoot, she confronts Ange and asks her why she sings the true Star Song before to get out of her Ryuu-Shin-Ki. Ange gets out too of her Ragna-mail and asks her who is she and what is that song. The two pilots discovered the images of their stories and relation, Sala quickly leaves and telling Ange the truth lies on the Aura. (CROSS ANGE: "Dragon Song")

Ange and Tusk are taken to see Aura Midgardia and her council, where not only Ange's temper gets away from her. Things look grim until Salamandinay, the pilot Ange met above Arzenal, presented herself as the direct descendant of progenitor Aura, princess of the Freyja family and Lieutenant Guardian. When the council ordered the execution of Ange, Salamandinay intervened by saying that she could operate the Villkiss which means she was special and believe the best strategy would be to allow her to live until they learn the machine's secrets and she asked to the high priestess and her council to leave their lives to her and offers them hospitality and to show the two their world. During a tea ceremony, Ange's patience runs thin and she attempts to take their hostess hostage where Salamandinay not only shows Ange how they survived on their Earth, but also the source of the Mana of Light and the truth of the war between Arenzal and the DRAGONS and Embryo. Ange tries to attack Salamandinay, but is quickly subdued. Afterwards Ange and Vivian meet Salamandinay and another DRAGON female who actually is Vivians' mother and the DRAGONS plan a festival for her return. (CROSS ANGE: "The Other Earth")

She heard the report of Lizardia to the High Priestess who announced that it was time to recapture the almighty mother Aura from Embryo's hands and this battle was for the fate of their world. The next morning, she, Naga and Kaname invited Ange and Tusk to take breakfast with them and joined Lamia and Vivian. After that Lamia brought Vivian for shown her the house where she was born, they go to a stadium at Salamandinay's suggestion afterwards and Ange is surprised that the place is still in almost perfect condition today. She challenges Ange to a competition where if she wins, Ange must assist them in fighting against Embryo but if she loses, Ange is freed. They then compete through tennis, baseball, golf, and various other sports, and by so doing, they are able to develop a friendship. She tells Ange that she is more than happy to that Ange is able to stand up to her. She displays an elated expression, which is something nobody else has seen her do. Sala tells Ange that what leaders have to do is to protect their citizens; while on the other hand, Ange expresses a negative opinion that opposes Sala's beliefs due to her harsh experiences from being turned on by the people she was once to serve, creating a strained atmosphere between them. When an unstable singular point appears, she called her Ryuu-Shin-Ki Enryugo by activating her pendant and ordered to Kaname to notify the High Priestess and to Naga to take Ange and Tusk somewhere safe. She saved a group of people and ordered them to escape to the temple, she tried to destroy the unstable singular but without effect and asked what she was supposed to do, the High Priestess ordered her to retreat saying that the Ryuu-Shin-Ki was pivotal in the fight to recover Aura and the people of Vivel headed and they take care of the rest, she prospected and said she can't abandon these people, the High Priestess reordered her to retreat before to finish the call. She was saved by Ange when a Iaria vehicle went to strike her, she is confused, at the proposal of Ange, Salamandinay embraces the idea of negating the effects of her weapon, the Convergence Space-Time Gun which activates by singing a song called "Towagatari ~El Ragna~", with the Villkiss' Dimension gun and close the singular point. As this event triggers, Salamandinay realizes that she must act as a leader, and she pours her heart out to Ange, saying that they must increase mutual trust and that her mind is set on them supporting each other as good friends. The two acknowledge each other as friends and Ange gives Salamandinay the nickname "Salako" as she has problems pronouncing her full name. Salamandinay wishes to call Ange "Anko" but the latter refuses. (CROSS ANGE: "Resonant Battlefront")

In the hot springs, she revealed to Ange that she has discovered Aura deep underground in the Empire of Misurugi , and that they must march with all power to the Empire of Misurugi through a singular point to recapture it. She tells Ange that she trusts her judgment, and that if she were to go to the war front with Ange, she would be very glad. In the evening, after hearing Ange's choice, she arrived by saying that she will be forced to fight her again, Naga said that she was dangerous and she known too much about them but Kaname told her Ange saved the townspeople, Naga added that it's not that long ago they were trying to kill each other and they should take her into custody. Ange informed that she didn't intend to fight them any longer to the surprise of Naga, she told her that she respects her decision saying she felt free to return to the other side when the singularity opened in the morning and she will have Kaname and Naga escort her if she required. Despite the protest of Naga, Salamandinay told her that she should not be surprised that she trusts a friend and said Ange they will finish their competition when the battle will be over. The next day, after the arrival of several DRAGONs and the speech of Aura Midgardia, she boarded into her Enryugo and ordered as lieutenant guardian to all units to move out. After to have traversed the singularity, she noticed that they were 48,000 northeast of their destination coordinates, Kaname said that the singularity was supposed to open over Misurugi, they were suddenly attacked by missiles and noticed five black Villkiss who engaged the fight against them. She said to Kaname and Naga that this was an ambush and ordered to all units that their priority was defeated the enemy, during her fight against a black Villkiss, Kaname informed her that the right flank was down thirty percent and Naga that the left flank's line wasn't going to hold, she said that there was only five of them before to be saved by Ange of black Villkiss' attack. Ange told her to retreat but she refused because they must take Aura back from Embryo, Ange told her she was the lieutenant guardian and she should look around her and questioned her if she really thought to retake Aura in their current situation. Tusk advised Salamandinay to retreat for now and to regroup if they wanted to win next time, she finally ordered to all units to retreat to the singularity, she gave Ange her Beam Rifle and said her to be safe. During the retreat, she was very worried when Ange battled three black Villkiss and returned with the others DRAGONs in their world. (CROSS ANGE: "The Black Angel of Destruction")

After Lizardia was freed by Momoka to open the singular portal, Salamandinay and her comrades has invaded the Misurugi Empire to support and save Ange from the Diamond Rose Knights. Salamandinay appears that she can't free Aura that she and her comrades are not strong enough to put a stop to the Diamond Rose Knight, she ordered Naga, Kaname and Lizardia to retreat, but moments later it appears that Salamandinay has slaughtered and killed several of Ersha's Preschool Childrens in the Misurugi Palace lies in ruins, Ersha has been backfired and weakened by Salamandinay and revealing Ersha's True Weaknesses for the first time.(CROSS ANGE: "The One Left Behind")

Ange calls her by then nickname Sala-(ko) (Sala-girl) and variations thereof, much to Salamandinay's chagrin.

Tusk appears to be supporting her in order to help her and save the Empress of the DRAGON Empire "Aura" from Embryo and the world.

Hilda made her alliance with her in order to help Ange to defeat Embryo and his Knights The Diamond Rose Knights and save the world.

Vivian realized that she's part of the Dragon Clan and thanks to her, Vivian has finally found her long lost mother named "Lamia". Vivian decided to help her to save the world from Embryo. 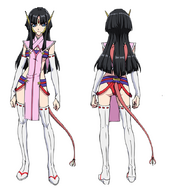 Salamandinay in the second ED. 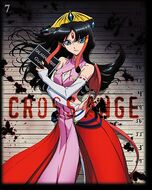 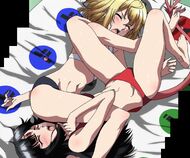 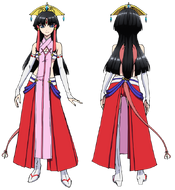 Ange and Salamandinay on a Promotional poster.

Salamandinay seeing her Past Life.

The Past Life of Salamandinay and Ange.

Salamandinay having a Conversation with Ange and Tusk.

Salamandinay and Ange has Arrived at the Tower of Aura.

Salamandinay and Ange are inside the Tower of Aura.

Salamandinay, Lamia and Vivian in the Dragon Clan Festival.

Salamandinay in the Dragon Clan Festival.

Salamandinay is about to Encounters Embryo.

Salamandinay and Ange in a war against Embryo.

Salamandinay Model Kit Full-body 5.
Add a photo to this gallery

Retrieved from "https://crossange.fandom.com/wiki/Salamandinay?oldid=25366"
Community content is available under CC-BY-SA unless otherwise noted.