Watchdog of the Market
"Jasmine Mall"

Vulcan (バルカン, Barukan?) is a supporting character that appears in the CROSS ANGE Rondo of Angel and Dragon television series. Vulcan is Jasmine's pet dog.

Vulcan is a large dog who wears a brown leather pilot hat and yellow glasses on his head. During the "Festa Festival", Vulcan wore a pink dive mask, snorkel, and a pink suit with white stripes.

He knows how to sell things and handle money.

After Ange, Momoka Oginome, and Hilda escape, Vulcan was reprimanded by Jasmine for allowing Ange to take weapons and to be bought out cheaply. (CROSS ANGE: "Bikini Escape")

Jasmine and Vulcan escorted Salia which had to bring Ange to the submarine but Ange becomes stubborn and defiant to Salia. At a moment Momoka said Ange to hold her breath and threw pepper and manage to escape. After this Vulcan was seen aboard the Aurora with Jasmine and Emma Bronson. (CROSS ANGE: "Arzenal in Flames") 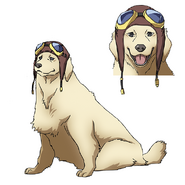 Vulcan being blamed by Jasmine.

Retrieved from "https://crossange.fandom.com/wiki/Vulcan?oldid=23048"
Community content is available under CC-BY-SA unless otherwise noted.