Captain (Former)
Zola Axberg (ゾーラ・アクスバリ, Zōra Akusubari?) is a supporting character that appears in the CROSS ANGE Rondo of Angel and Dragon television series. A Norma, she was the Captain of the First Troop and piloted the AW-FZR304 (ZR) Arquebus Zola Custom.

Zola is a tall, voluptuous young woman with long blonde hair that drapes all the way down to her hips. She has two tattoos of her personal insignia, one on her right thigh and the other on her left breast. Her left eye is prosthetic, having lost her original in a battle with the DRAGONS.

She is a hedonist with a preference for new cadets, a fact that causes her vice-captain Salia considerable frustration. She cares very little about consent as seen in her attempted rape of Ange in the torture room.

Zola has no qualms about indulging in sexual relationships with her subordinates, all of whom are younger than her and in their late teenage years. She parades around a harem of three, namely Rosalie, Chris, and Hilda, though Hilda is her favorite, as she is seen having sex with her red haired subordinate on screen the most. (CROSS ANGE: "Unyielding Spirit")

According to Jasmine, she was hard-working, cared for her juniors, and valued her comrades. Her impulsiveness was her only fault. (CROSS ANGE: "Villkiss Awakens")

Mana Cancelation-like all Norma, Zola was born with the ability to cancel out the Light of Mana.

Pilot-Zola was a highly skilled Para-mail pilot who had survived numerous encounters with the DRAGONS.

Leadership-Despite her hedonistic nature, Zola was a competent squad captain, able to strategize on an instant and expertly coordinating her troops in battle.

She was the Captain of the First Troop. She's killed when a terrified Ange clinged onto her para-mail, and a DRAGON hit them with its wing, causing them to crash. (CROSS ANGE: "Unyielding Spirit")

Her death causes Hilda, Chris, and Rosalie to hold a strong grudge towards Ange causing them to bully her continuously to the point that she was nearly killed during combat.

Zola's sex scene with Hilda, mocking her for getting tired 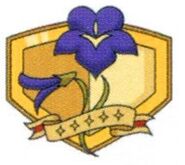 Retrieved from "https://crossange.fandom.com/wiki/Zola_Axberg?oldid=25625"
Community content is available under CC-BY-SA unless otherwise noted.